For the last 20 years, onwards KSSS is actively serving in the field of WASH development. With the support of the government and other funding agencies, KSSS has done the following programs

Trenches are a major component of the Natural Resource Management Programme in Midland and Highland areas. As we all know, rainwater harvesting pits slows down rainwater run-off and makes it available in the soil instead. This thus contributes significantly to the availability of water down the year. The experiments have proved that by constructing trenches we can increase the underground water level to have water in our open wells during summer. A major percentage of the rainwater we get in the rainy season is lost especially in the hilly regions because of not having blocked and unfiltered it down to our land. This helps to conserve water in the underground and we will be able to get enough water in summer. Therefore, KSSS promoted trenches in the drought areas. So far KSSS supported the villages to dig 130000 trenches in their households.

The wells in the project area used to dry up during the summer seasons. It is possible to extend the availability of the water from these wells for 2 to 3 months more by deepening.  Deepening of wells up to 5 feet will provide potable water in the wells for 3 more months in the summer seasons. Because of the geographical peculiarities of the high land area, the sides excavated shall be protected with concrete rings to avoid side sliding. We have supported more than 400 people for the renovation of unused well. This programme helps to avail drinking water in the house premises. This well reduces the drudgery of women to collect water from long distance. 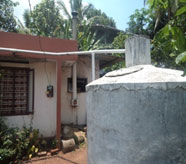 KSSS has built rain water harvesting tanks in the areas which are severely affected by droughts.  As an experiment to find a solution to the drinking water problems of the poor, we have constructed rainwater-harvesting tanks each with a minimum capacity of storing 10000 liters of water. We have also provided awareness classes in the village level on the usefulness, cost and other technicalities of the tanks. So far we have constructed 1195 tanks of 10000 liters capacity, 745 tanks of 5000 liters two tanks with the capacity of 75000 litters and the largest one we have so far made is the one which has the capacity of 1.2 lakh litters of water in the compound of Caritas hospital.

With step by step action, KSSS has completed the construction of 350 Rainwater harvesting tanks at Velliamattom, 350 tanks at Kokkayar panchayth 150 tanks in Peruvanthnam panchayth of Idukki District with the support of Rainwater Department of Kerala Rural Water Supply and Sanitation Agency (KRWSA)

In order to promote the soil and water conservation activities, KSSS organized a competition for SHG members. The contestants had to give the best the photo on soil and water conservation activities undertaken as a family along with a catching caption. Each contestant was allowed to send up to three pictures. A panel of experts scrutinized the photos received with captions and the winner was awarded in the public meeting.

Two check dams were constructed in the villages of Marika and Thadiyampad with the support of Andheri Hilfe-Bonn, Germany for the utilization of the villagers in these areas for agriculture and household purposes.

Contour stone bunding consists of constructing narrow-based trapezoidal embankments (bunds) on contours (contour lines) to impound runoff water behind them so that all the impounded water is absorbed gradually into soil profile for crop use.  The design of a contour bunding system involves the determination of the spacing between the bunds, the cross sectional elements of a bund and the type and dimensions of the surplus system. This activity is taken up in areas with mild slopes. This is an effective measure for soil and water conservation in this area. The contour furrows so created would form a multitude of mini barriers across the flow path of the run off which improves the detention storage in situ. This activity will increase the water table and discharge. KSSS has constructed 22000 meter square of stone bund with the support of CAPART, INRM and SPED in Idukki and Kottayam district. 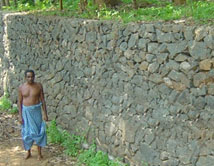 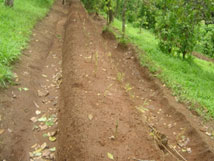 Soil bund with vegetative measures is the most feasible programme, both technically and financially, to put a control to increasing soil erosion. Soil bunding with vegetative plantation will give more strength to the bunding and reduce the intensity of running water and help to penetrate the slow down water into the earth. The roots of vegetative plantation will hold the soil from edge sliding. This will reduce soil attrition to a very great extend. As part of the soil and water conservation, we have promoted 110000 square meter soil bunding in the Idukki district.

In some areas the ponds have been wasted away by people dumping waste from the households into the ponds. Through the proposed activity such ponds in the project villages will be identified and cleaned up so as to make available these spaces for water harvesting and thus upgrading to the ecological balance in the regions.

Kottayam Social Service Society successfully implemented Jalanidhi – World Bank assisted ‘Rural Water Supply and Sanitation Project’ of State Government of Kerala. The project is being implemented with the aim to increase the access of rural communities to improved and sustainable water supply as well as sanitation services through a decentralized and demand – responsive approach.

KSSS became the partner organization in the year 2013 for implementing the project in Maragattupilly Panchayath, Kottayam. The main activities included construction of 900 well-recharging, and 3000 drinking-water programmes. 27 projects are being implemented in Maragattupilly under the Jalanidhi Project. 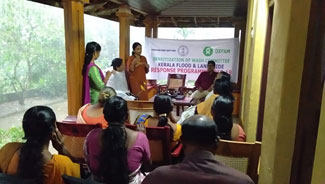 The WASH aspects of the communities in Veliyanadu, Ramangari, Pandanadu, Thiruvamvandoor, Muttar and Thalavadi villages of Alappuzha district had totally collapsed during the floods. The water bodies were polluted, drinking water became scarce, and waste management was not proper. At this point KSSS initiated the promotion of WASH aspects in these floods affected communities with the help of OXFAM India. Awareness programs were conducted at the community level, school level, and SHG level. KSSS installed water filters in the villages, distributed sanitation kits and cleaning kits to the households, sent trained volunteers to the flood affected villages to clean their houses and premises. Also, KSSS chlorinated 500 wells and built 30 toilets. For the sustainability of the programme, 40 WASH committees were formed in the various villages.

KSSS in association with German Medical Aid Organization and Andheri Hilfe distributed Portable High-tech water purifier units at Kumarakom, Olassa,Peroor and East- Nattasseri in Kottayam district and Veliyanadu and Kannamkara in Alappuzha district as part of its flood rehabilitation activities. Mar Mathew Moolakkatt (Archbishop of Kottayam and Patron of KSSS) inaugurated the distribution. Each unit has the capacity to purify 1200 liters of water per day. KSSS also distributed 200 micro filter units for households in the flood affected areas of Kottayam. 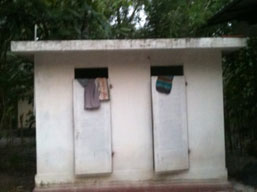 KSSS Jalanidhi Project in collaboration with Suchitwa Mission constructed 97 toilets at Marangattupilly Panchayth. Under this scheme, the assistance is limited to household’s belongings to economic weaker sections and has no sanitary latrines. Through various planning meetings surveys and persevering efforts in 14 wards of the panchayth, sanitation systems were built in 97 houses. During the public meeting held as part of “World Literacy Day “on September 8, 2016 Maranagattuapally was declared as a Panchayth with total sanitation by Adv.Mons Joseph MLA.

As part of its flood rehabilitation programs, Kottayam Social Service Society in association with Oxfam India provided fifty proto type toilets to the people of Alappuzha and Pathanamthitta districts.

In an attempt to spread awareness about the importance of cleanliness, Kottayam Social Service Society in association with Oxfam India organized street plays in Alappuzha and Pathanamthitta districts. The street plays focused on conscientizing the public about health and hygiene practices, food safety and waste management. KSSS women Shingarimelam team played in the background and attracted public attention to the street play. 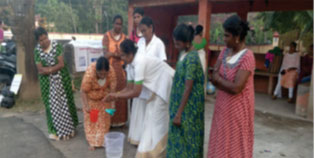 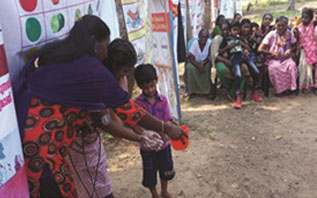 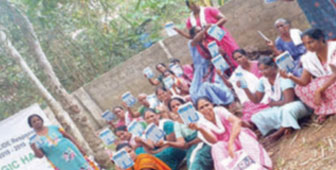 Hygiene Kit Distribution for the prevention of COVID-19 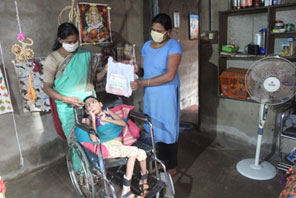